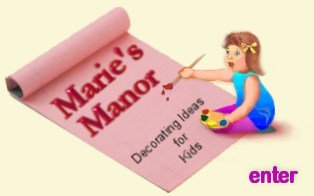 Lets get Creative and turn those rooms into works of art!!

Hi, Hope it is not too late to give you some pirate ideas. We are finishing up doing a pirate bedroom for my 6yo boy. I started with a bedcovering to select colors. I wanted a style that would not look to babyish when he got older. So I decided on the Nautical stripe sheets, in khaki, red and denim and a denim comforter. The walls were painted in three colors. Khaki on the top half and a denim like paint treatment at the bottom done with a glaze and stiff brush dragged thru it. There is a 4 inch red band painted as a border. On the top and bottom of the border we nailed rope. It looks neat. I've also seen this done with a burlap strip nailed for a border. I used some crates from the craft store as stackable shelving and draped some fishing net over it. A pirates wheel from the party store hangs above his dresser. I wanted to put a port hole over his bed but lost out to a Pirates of the Caribbean movie poster. He has woven wood blinds. I am working on decoupaging some maps to an old desk and refinishing his toy box to look like an old treasure chest. Over his desk he has two of those cloth memo boards with map fabric. I collected accessories for several months as I came across them shopping until we were ready to paint and put everything together. I'd like to hear how your sons room turned out!

Next, my other son is waiting for his outer space bedroom.