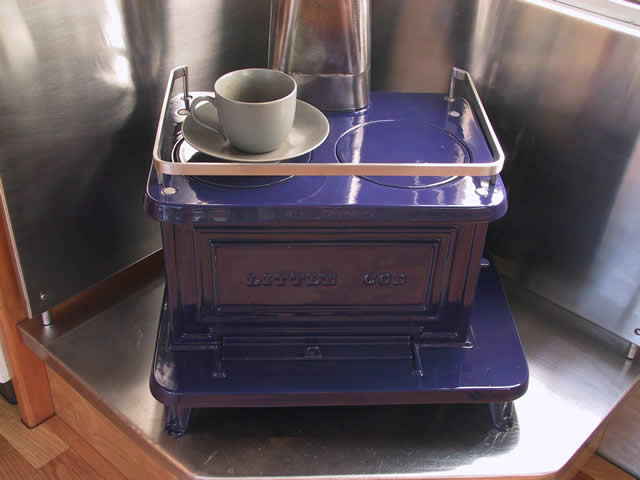 My boat had a beautiful stove when I bought her but the stove pipe on deck was never installed. It came with a section of solid stainless pipe, but due to the taper on the exterior 'male' piece of the Charlie Noble, that pipe will only push down about 1/8 inch onto Charlie. I've managed to get a section of cheap 'snap together' stainless pipe on, but it never seems very secure (I did add braces). I've not been able to find a section of pipe with a taper shaped in, so I'm looking for solutions. My 'Charlie' was probably cast by a local foundary but looks VERY similar to the one on marinestove.com. How are you SUPPOSED to attach pipe to the Charlie?

Also, what's a good way to attach braces to the exterior pipe?

For clarification, it's my understanding that the cast trough style deck fitting is called the "water deck iron" and that the sheet metal rain cap attached to it on the exterior pipe taper is the "Chuck Noble". We kind of go by the lubberly smokehead name around here as I never knew why it was called the C.N. till just last year. Supposedly an extremely detail oriented ship captain named C.N. loved to see his fitting gleam oxide free in the crisp clean morning air as he strolled on deck to take in the morning. So in honor of that capt., the fellow who did the actual polishing thought it best to name the fitting after is capt. I think that polisher crew member thought C.N. was a bit of a fussbudget but I'm sure hoping I have a fitting named after me!

Best way to accomplish what you want to do is to measure the OD of the pipe taper down in the trough roughly 1/2" up from the bottom of the trough. If you make or have made a pipe/smokehead that has that dimension as its ID, then as you slide it down over the tapered portion of the deck iron, it will snug-up just shy of bottoming out in the trough. Right? Trying to match the taper would be a bugger and is not worth doing. The cheap snap seamed pipe will always give up doing its job as you force it down over the taper to make a nice tight jamb fit. Stay with a true lapped Pittsburgh type seam or what some call hammerlocked. It likes to be abused unlike the snap style seaming.

Most folks just attach the smokehead to the deck iron and perhaps use two screws to secure the joint. Some want more height and add a pipe before the head. If you have a good jamb fit you should not need any guys at anchor to maintain an upright pipe. Stow the whole thing when you are moving and bung the iron? One thing which we did was to standardize to 4" OD on both the interior & exterior portions of the iron so true 4" heads & pipe could be used. Some older nominal sized irons will drive you crazy and force you to make custom parts to fit. Was that the intention of the makers? To make you come to them for a smokehead? Maybe?

Andrew,
Thanks for the response and the clarrification. My 'water deck iron' is located only 6" ahead of my dodger so I need a section of pipe to extend it clear of the dodger. Also, my stove is a diesel and can be used underway, so I like having the bracing, though in a storm it would definitely come down as you suggest. Right now I have a couple of brackets attached with hose clamps to which I can attach bars angled down to the deck. It's also located that guests tend to try and use it as a handhold despite warnings...