Last year the Woodland Trust purchased land at Low Burnhall, Durham. They have asked me to research the history of the site, with special emphasis on its coal mining history.

There was a pit established on the site sometimes called Croxdale Colliery or Croxdale Pit (In some sources this pit is also called “Meadowfield”) which had opened by 1845, but was closed by 1870. To confuse matters a second Croxdale colliery was established at Sunderland Bridge, a mile or so to the south of the site, which operated from 1873 until the mid to late ninteteen thirties.

If any readers of this forum have any information on the first Croxdale Pit at Low Burnhall, I would especially like to hear of any family histories or pictures, would you please get in touch with me at petergsimpson@googlemail.com.

Hi Peter,
I hope your quest goes well and you get a response from readers of the Forum. There is quite a solid following of Mining History and Memorabilia in the Land of the Prince Bishops. I will mention your search to a few enthusiasts I know up there.

I thought I would answer your post to lift it out of the meelee of Faking topics, back to the top again.
Charles

Hi Peter
Any developments to post on the Forum for us?

In the Tyne & Wear Archives there is a note book from one Andrew White, described as ship and coal owner. This is perhaps the same Andrew White who was the first mayor of Sunderland - but can anyone verify that for me?

In the notebook he states that in 1836 he, Richard White (perhaps a brother?) and John Robson were owners of several colleries including Whitwell, Brandon, Framwellgate Moor and Croxdale. The notebook states the terms agreed with the Landowner, Mr Salvin, for coal leases for Croxdale Hall Farm, Croxdale High Farm, Butterby, Sunderland Bridge and Low Burn Hall - which is the pit I am interested in.

The first coals from Low Burn Hall were obtained in 1845, but by 1847 there was already a dispute between the Salvins and the lessees and by 1853 it seems that mining there had probably ceased. The wagonway down to the Pit was certainly disused by 1858.

If anyone has more information on Andrew White I would be most pleased to receive that.

I can't help you with any images of memorabilia or plans related to the pre 1873 Croxdale Colliery but the picture below is one of the Durham Miners' Association Lodge memberships badges from Croxdale, Thornton Pit. It dates from the period 1876-1934. There is no membership number stamped on this one indicating that it may not have been officially issued. These acted as the union membership badges of their day. I don't think one would have been issued for the earlier Croxdale Pit as their use doesn't normally pre-date the mid 1870s. 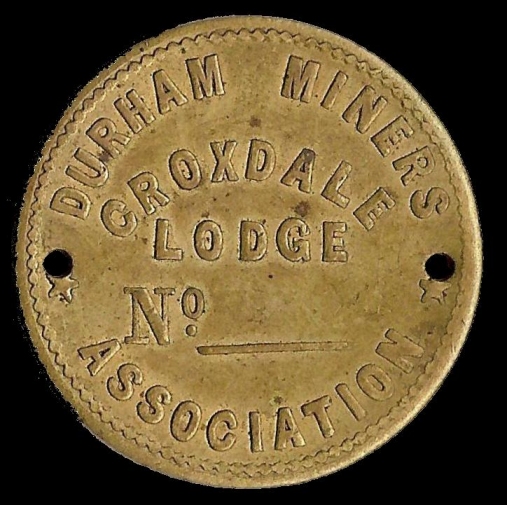 Try Durham County Archive Services for the earlier Croxdale pit information you are looking for. They have a searchable colliery documentation reference list on their web site is arranged alphabetically by mine name.

Peter - there was an article - "Coal from Croxdale Pit" by Peter Grant - published in Bulletin 14 of The North East Industrial Archeology Group, August 1971. The article is of five pages plus one page for a map.

The Colliery only had a short working life and this may well be due to geological conditions. The Ludworth Whin **** runs from east to west quit close to the site of Croxdale Colliery. This had the effect of reducing the percentage of volatile matter in the coal for up to about three-quarters of a mile on either side of it. This would probably mean that coal mined from this area would fetch a lower price than from other, better placed pits.

When Littleburn Colliery was flooded in the early 1950s due to the River Browney bursting its banks, water came up the old Croxdale Colliery shaft and caused some damage at Low Burnhall Farm. The shaft was subsequently filled in.