Re-posted thread via Webmaster from June 2009 as part of Forum topics re-organisation.

Has anyone ever come across any UK mining explosives issuing tokens or similar? I know such tokens and checks were used in the US coal industry and had been told by at least a couple of very old English colliers that they remembered using something similar in their pits (pre 1947).

Recently I picked-up a 32 mm dia. brass embossed check which had around the edge of its obverse the legend HEDDON COLLIERY POWDER FUND plus two small pierced holes at 3 and 9 o’clock (like those on miners’ association checks/badges). The check did not have a stamped number in its centre like on a lamp or time check etc. instead this space was empty. The revere of the check had the embossed name and address of its maker in a circle. This maker was once a prolific producer of brass pub and other tokens in County Durham and Northumberland and also possibly operated a brass foundry.


Heddon Colliery closed c.1930 and was located 7 miles West of Newcastle-on-Tyne near to the pit village of Wylam (George Stephenson’s birth place). As far as I know this is the only check of any sort known from this colliery as none are recorded in Jeff Gardiner’s book of Durham and Northumberland Tokens.

Presumably the reference to POWDER on this check is to black or gunpowder used for blasting. The word FUND implies to me that there was some sort of communal fund that the miner’s paid into to purchase their powder. Bulk buying of powered or any other sort of mining consumables, by a group of miners, probably brought with it cash discounts which would be the incentive to joining such a fund/club. Possibly the check with its two distinctive piercings was issued by the system’s organisers as a type of membership badge to paid-up fund members, much as miner’s association checks/badges were used. The wearing of the badge would also act as a good advertisement for the scheme that presumably paid more financial discounts to the members the more miners were part of it.

If anyone can supply any further information about this check or the existence of other “Powder Funds” please let me know. Any information on these subjects will be most welcome.

Can you supply the makers name for this check?

The makers details are embosed in small letters in a circle in the middle of the check's reverse and read; 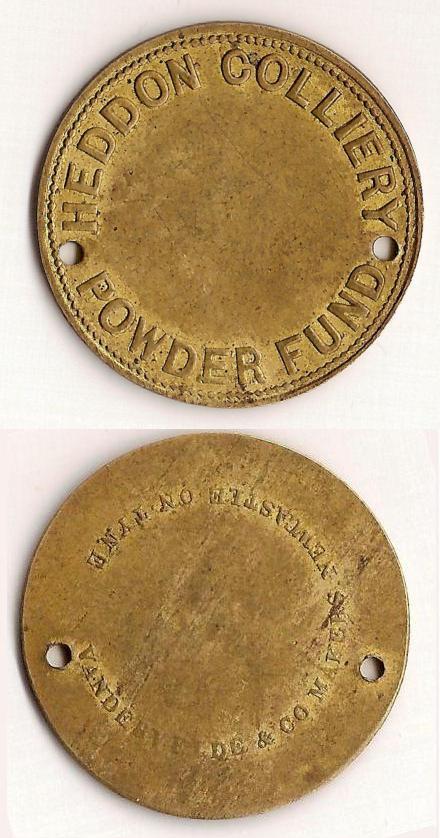 No one knows if this famous north east token manufacturer produced colliery checks for the Great North Coalfield but I suspect that he did. Many of his other pub tokens etc. are also signed. I also have an outdoor type ornate brass head office wall plaque for the Pontop Coal Company that is also signed by him as the maker. I think it's likely he was well connected with the north-east colliery owners and probably did make a lot of the areas lamp checks.

James Laidler of Durham City also operated a brass foundry along with their safety lamp and other light engineering activities. I suspect they may have also been supplying the north-east coalfield with embossed checks. I've certainly seen there name on the reverse of at least two off the distinctive north-eastern tub or putters and hewers tokens. These tokens are of cast white metal.