Can anyone throw any light on the brass embossed and uniface check below? 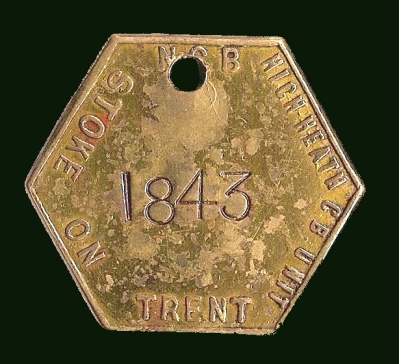 It is fairly large measuring 39 mm across the flats by 44 mm between the points. The large size could possibly make it a pay check as these are often larger than lamp or cage riding checks.

If you haven’t spotted the anomaly on this check already it is with regards to the colliery name - High Heath CB Unit. There is no official listing for such a Coal Board Unit (i.e. colliery) in Stoke or anywhere else in the UK.

I have always assumed this check was a blundered issue resulting from either a diesinkers mistake or a transcribing error from the time when the order for the checks was placed, i.e. HIGH, in the colliery name, should read HEM.

Hem Heath Colliery was a major 1950s re-development by the NCB of a coal and ironstone mine (of the same name) that was sunk in 1924 by the Stafford Coal & Iron Company Limited. In 1990 Hem Heath was merged with the adjacent Florence Colliery to form the Trentham super pit. Prior to its closure in the late 1990s the super pit was operated briefly by Coal Investments Limited.

While recently looking on Google Earth at the area where Hem Heath and Florence once stood I noticed there was an area between the two that bears the name “High Heath”. This made me wonder if the NCB had perhaps originally planned to call the re-development of the original Hem Heath pit by the name High Heath, to differentiate it from the earlier pit on the same site? If this were the case then maybe some checks were ordered prematurely in the 1950s and were subsequently used on a limited basis until the former name of Hem Heath was finally settled on and replacement checks ordered.

I a spoken to a couple of knowledgeable collectors in the Stoke area who, over the last 20 years, have seen two or three other examples of this check type between them. They are equally baffled by the name of the pit these checks bear.

Are these checks just the result of a manufacturing mistake or do they hint at a forgotten bit of North Staffordshire coal mining history?

Email
c
Charles Birdsall
86.54.202.11
Re: High or Hem - What's the Story behind this North Staffordshire Check?

I have Two Hem Heath CB checks, one round, One oval brass embossed. Will post pics when I master the science of it!!